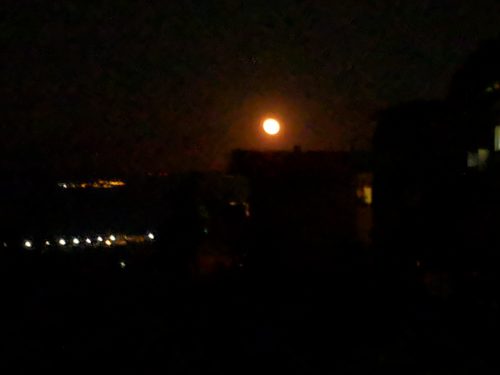 Last night when I went outside to say goodbye to a friend, we saw the ‘pink moon’ we’d been told to expect. But it wasn’t pink, it was bright orange. An extraordinary sight, hanging low over the Turkish coastline. The top line of lights on the left of the photo is the Turkish coast; the bottom line is the coast of Lesbos.

Today I climbed up the steep concrete road behind my building, hoping to get a view down to the lagoon on the far side of the hill. But the road fizzled out at the gated entrance to a private villa, and I turned onto a dirt track which followed the contour in the opposite direction. It was early afternoon and the sunshine was dazzling, but the wind remained very cold. (It hasn’t escaped me that in the UK it was 23 degrees yesterday and today – while here it was 13 yesterday and about 16 today.) The dirt track wound its way slowly upwards through terraced olive groves. The trees were gnarled and ancient-looking, the soil was more like crumbling flakes of rock and wildflowers grew everywhere. Dark, indigo-coloured lavender, with tiny bees flitting from stem to stem, and a pale lilac flower with five petals and an egg-yolk coloured centre. The petals are slightly crumpled, as if they were made of some fabric that crushes easily and has just come out of a suitcase. And growing in amongst them, wild thyme. I took a tiny side path which wound its way upwards then disappeared in a tangle of heather. I wasn’t up for a long walk so I sat down under a tree and spent an hour drawing. Below me, down on the coast, the olives were interspersed with villas, all of which seemed to have new roofs of the same bright orange. Then the sea, sweeping round a headland; and on the horizon, the hilly coast of Turkey. It’s five miles away, but it looked astonishingly close. 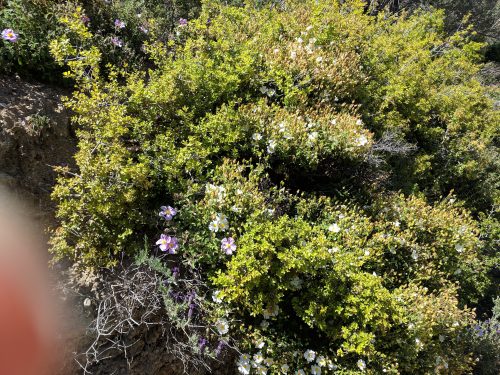