Dancing in the kitchen 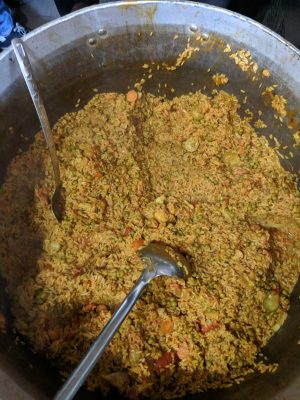 ‘OHF’ is the acronym for the Swiss NGO with whom I’m volunteering. It’s a day centre for refugees who are trapped on Lesbos. They’ve risked their lives crossing the sea in inflatable dinghies from western Turkey to the island and put in their asylum claims; now they have to wait, confined to the island, while the claim is processed. This can take two years or more.

‘OHF’ stands for ‘One Happy Family’. The name sounds twee to an English ear, but there are very few of those : the volunteers I’ve met so far are Swiss, German, Austrian, Greek, Spanish, French and American, plus a small contingent of Brits. And after four days at OHF, I understand why the name was chosen. The centre does exactly what it says on the tin: it provides a warm, lively and supportive community for refugees from diverse backgrounds at a time when they’re feeling (and are) extremely vulnerable. The present refugees who visit OHF are from Afghanistan, Pakistan, Syria, Iraq, Palestine, Cameroon, Sudan and Congo, among other countries.

OHF occupies a former industrial building on a windy hilltop overlooking the sea. The sixty or so ‘helpers’ who run the place alongside the volunteers are themselves refugees. Most live in Moria, the overcrowded former army camp a few miles outside Mytilene which is sometimes in the news due to the intense overcrowding and appalling conditions there. The uncertainty about the future, combined with the living conditions, causes acute additional stress to people who’ve fled their countries due to violence and trauma; and volunteering at OHF can help take their minds off things. It also provides warmth, friendship and an opportunity to improve English language skills.

People working at OHF frequently refer to the centre as a ‘bubble’: a place with a happy atmosphere where up to one thousand visitors a day can temporarily forget their troubles. Most are young men in their early twenties; but there are also families, single women, children and a small number of older people. Nowhere is the upbeat atmosphere more striking than in OHF’s tiny kitchen, where two refugee chefs and their team of helpers produce a delicious, free meal every day for all comers. The food is cooked and served to the accompaniment of loud African and Middle Eastern music, and sometimes a glance through the serving hatch reveals the chefs and their assistants dancing while they work.