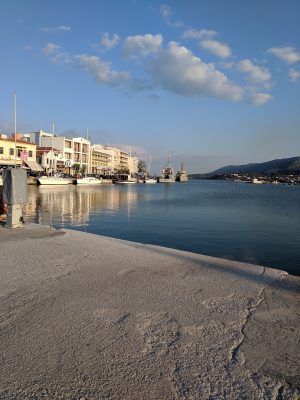 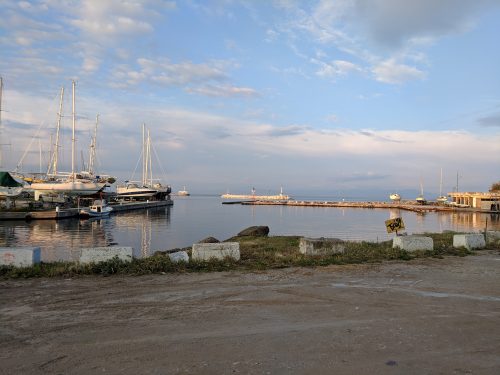 Lesbos is a troubled island. Before the refugee crisis, they say, it had a thriving tourist industry. Since 2015 that’s been seriously damaged, and Greece as a whole remains in the throes of economic crisis. There’s resentment on the part of the Greek inhabitants of Lesbos towards both the refugees and the mostly European volunteers who come here to work with them. Refugees sometimes experience intense hostility and have to be vigilant while moving around the island away from the camps. For the volunteers life is much easier, but sometimes islanders make plain that they dislike us. It helps of course if you speak Greek, but most of us don’t. I’ve tried to pick up a few words and make an effort to greet people politely in the street and in shops. Mostly, so far, I’ve had a friendly response. I would love to study Greek, but have decided I can’t make progress with two languages at once and Arabic is more important to me.

When I walk down into Mytilene in the mornings, the first thing I pass is an irrigation tank in the olive grove below the lane. Frogs croak so loud they could be old men chatting. On the opposite side of the lane, a handful of cats inhabit two giant plastic wheelie bins overflowing with rubbish bags. They’re a sorry sight, mangy, nervous of humans and desperate for food. I saw a cat pick up a rubbish bag in its mouth and drag it away to pick through. Five minutes later, when I get to the first apartment buildings, barking breaks out. People keep dogs for security, although there’s supposedly very little crime on the island. My impression is the dogs are fed well enough but mostly ignored; certainly never taken for walks.

The apartment buidings on the left are new, ugly and freshly painted. On the right a ruined bar clings to the hillside. It’s door’s ajar and inside the collapsed roof trails down over what was once the counter. The brickwork that remains is attractive: it’s an old building which has been abandoned. There are lots of abandoned and semi-ruined buildings in Mytilini; some of them massive villas from the days when wealthy Greeks came here for their holidays. Some are squatted by refugees and homeless Greeks, but not this one. It’s in too much of a mess.

After ten minutes I turn onto a bigger road, where I have to watch out for hurtling mopeds and speeding cars. There’s a pavement on the right, and soon I come to the grey pony. He stands at the top of a narrow stretch of waste ground, on which there’s no grass at all, just churned up earth. It’s between a new building and another ruin, and fenced off from the road by a tall wire fence. The pony’s thin with a pretty, dappled coat. He stands as close as possible to the wire, looking out, as if he’s desperate for company – not to mention food. He has a very gentle, sweet-natured look. Sometimes I stop and stroke his nose, but then the dog in the adjoining garden starts to yap and I move on.

In ten minutes I’m on the seafront in Mytilini, approaching the marina. It’s full of the white yachts of the wealthy; but the municipal park opposite is overgrown, unkempt and littered with rubbish. Presumably there’s no money in the public coffers to pay for gardeners.

After the marina there’s a giant car park, with a couple of supermarkets down one side. The car park is the domain (literally, they live there) of a number of Roma families. They make money by begging, using their children to play on people’s emotions, and adopting aggressive tactics if they don’t get what they want. When I was here a year ago a little girl scratched me hard enough to draw blood when I refused to give her money. So it’s a car park to cross at speed.