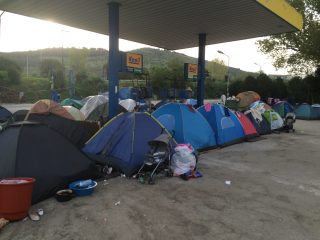 Yesterday was a tiring and stressful day. It rained on Friday night and most of the tents are not waterproof so everyone was wet and cold in the morning…We went into Polykastro to buy plastic sheeting to cover the most vulnerable tents in advance of a storm that was forecast for the afternoon. We got a good deal on the plastic from a nice hardware store owner and went to the camp. Most of the plastic sheeting was gone in half an hour, everyone claiming that their tent was unusable. We tried to only give the sheets to people who did not have fly sheets, but it was difficult. I can explain in Arabic to the Syrians and Iraqis but none of us have Farsi or Pashtu or Urdu. As a result I think there is a feeling that we are favouring the Arabs, and it is probably true. It is hard to give as much to people with whom you cannot communicate. Gradually we are finding some children and youngsters among the Afghans who speak enough English to act as translators. They are impressive, all of them. Strong and intelligent and on the ball when we need their help. I now have a large crew of youngsters who help with the pudding distribution in the evenings; they are all Arabs because I can explain to them where to go and to whom to give the puddings.

I stopped doing the tents when our new volunteers arrived, so that I could help with the tasjeel. We set up a plastic table on the forecourt and take orders from refugees for things they need from the warehouse, T shirts, trousers, boots, soap, shampoo, nappies, bags. Many women are asking me to bring them buggies for their children, but there are none at present. I took about 30 orders from the Arabic speakers and another volunteer took at least twenty from all the other language groups.

The storm was less dramatic than expected but it rained heavily for a couple of hours and there were some loud claps of thunder. By then most tents were protected and we volunteers were having lunch in a café up the road in Evzoni, the local village. When we got back it was time for pudding distribution, and after that I sat down with a Syrian woman who wanted me to explain her options in terms of asylum claim. Her husband is in Denmark and she is here with their small children, hoping to join him. I think she will be able to, but when I told her it might take as much as 11 months, she started to cry. The look of despair that settled on her face was awful. I tried to comfort her, but don’t think I succeeded.

Eleven months living in conditions like the ones at Hara Hotel – it does not sound as if conditions in the government camps are any better – is very hard to contemplate. Inadequate food, no privacy, dirt everywhere, and quite possibly no education for the kids. How can Europe claim to have ‘values’ when it allows people to live in conditions like this?

Next I spoke with a young Afghan woman who is here with her family and has good English. I think she has a good asylum claim but she has only a few days in which to make her skype call to the government asylum office before her temporary permission to be in Greece expires. After that they will be at risk of deportation. The only way to start the asylum process is to the Skype call, and it is impossible to get through because they don’t have enough staff the other end.