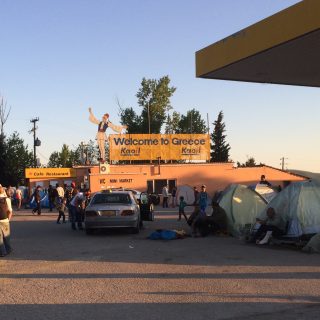 One of our Syrian refugees, a lovely woman in her thirties, has a son who is very short-sighted. His glasses got broken and another volunteer took them away to get them fixed and somehow, between the lot of us, they got lost…So today I told her I would arrange a new eye test for her son and get him some new glasses, to be paid for by another volunteer. We spent an hour together sitting in my car, trying to make a Skype call to the Greek Asylum Service. This is the way all the refugees who arrived in Greece before 20 March 2016 have to start their asylum application. It sounds fine as many of them have smart phones; but (a) there is often no internet at the canps and (b) the Greek Asylum Service does not have the staff to answer the Skype calls. That means that it is well nigh impossible to get through. The Syrian woman sat in the car with me, holding her youngest, a sleepy lad of fifteen months. We tried the call fifteen to twenty times, and each time we got an odd-sounding engaged tone. It was a rather unpleasant sound, harsh on the ears. This woman has a husband in Germany but is here alone with five children, from the baby to the fifteen year old who needs the glasses. She is probably eligible for family reunification with the husband in Germany, but it will take up to eleven months before they can go, and that is from the date of her interview with the Greek asylum service. God knows when that will be, but it is likely to be a couple of months after she gets through on Skype.

Eventually we gave up on the call. I then drove into Polykastro to look for an optician. I went into a toy shop to get something else and found a woman with reasonable English. When I asked her where to find an optician and told her about the refugee boy who needed an eye test, she offered to take me there in her car, as that would be easier than explaining how to find it. She was so kind that I gave her my phone number and told her to contact me if she ever came to England, which she was dreaming of doing. In exchange she said if I needed any more help, I should call her.

I think a lot of the Greeks are kind like this. The community is under strain from the presence of 600 odd volunteers in the area of Idomeni, which is understandable. I find that provided I am polite and respectful to people, they are generally very pleasant.