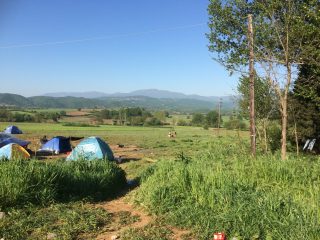 This morning – another soft, warm, spring morning – we arrived at the camp early, met up with a couple of our Syrian friends and walked the three miles across the fields to Idomeni camp. The first part was an easy stroll along mud tracks cut into flat fields of new wheat; then we came close to the railway line which runs right to the (now closed) border crossing…Immediately we saw tents pitched on and beside the train tracks. The station itself was small and tatty, a low building which had seen better days. People were just waking up in the tents, opening their doors, brewing tea, a few children playing. Soon we found our way into Camp A, where UNHCR were holding a meeting to explain to volunteers what advice to give to refugees about their legal position.

A young Greek woman lawyer spoke to us and answered questions for a couple of hours. She was a UNHCR employee but had previously worked for the Greek asylum service. She was excellent, very clear, and careful to point out the complexities of Greek asylum law and the glaring inadequacies of the processing system. All refugees have to begin their claim by making a skype call to the Greek Asylum Service; and at present it is well nigh impossible to get through. Each language group is offered a slot for one or two hours a week, and there are very few staff to take the calls. So frustration and anxiety are built into the system from the first moment.

But more of this later. It is 11.30pm and I am exhausted and tomorrow is going to be another very full day. It started to rain this evening, so we have to begin by reinforcing the tents with plastic sheets.