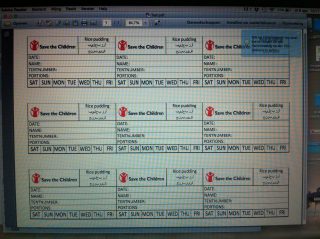 Yesterday a woman from an anarchist group who provide food for the camp every day, asked me if we could take over the distribution of rice pudding to the children. I asked my co-volunteers and everyone said we should do it… The first task was to count the children at Hara Hotel, our camp (that’s the name of the petrol station cum motel where our 600 refugees are camped). We decided that the puddings should go to children of ten or under. Now I think about it that was a bit arbitrary, as adolescents need such a lot of food, but that is what we decided.

So this afternoon, around five, I started to go round the camp with a piece of paper and a biro. Soon I had the help of Haifa, a lovely 18 year old with whom I was chatting yesterday. We went tent to tent asking how many children they had under 11, and if their neighbours were out, then how many such children did the neighbours have? The tents are in groups, incredibly close together in places. Many of them appear astonishingly orderly inside, with clean blankets spread on the floor and others folded neatly and stacked up against the walls during the day. After about an hour we’d done half the camp, on the Syrian and Iraqi side. The different groups have chosen to camp in their respective communities. By then I had two more helpers, so I asked one of them to do the Iranian and Pakistani tents and I went into the field where a lot of Afghans and some Kurds are camped. It was wonderful to hear Kurdish spoken again, after all this time. To my amazement quite a few of the Syrian Kurds at Hara Hotel don’t speak any Arabic. Even more astonishing, when we put the two lists together, we had a total of 195 children under eleven.

I thought the first pudding delivery was due the following day, but suddenly my anarchist friend appeared, saying it would arrive in twenty minutes. She was insistent that she should deliver the puddings out of sight of the tents, as otherwise there would be a riot (she was right). I took my trusty helpers, all teenagers, to the car and soon the anarchist van arrived. I was expecting little yogourt tubs of rice pud but no, these were huge soup bowl size puds – more than one small child could eat, you would think. They were in black plastic crates, half a van load, and we had to fit them all into the tiny hire car I’m using with my fellow volunteer Ian. The car was already stacked up with kids’ stuff and clothing, so we had to cram all the crates of pudding onto the two front seats. We hatched a quick plan, with different lads going off in different directions with a couple of crates a piece, plus plastic spoons, and a lad of sixteen to guard the car.

There were a few tricky moments, when arguments erupted as to who had already had a pud and who had not, but basically in twenty minutes we got rid of two hundred or so platefuls. It was painful to see how eager the children were for the food, and painful to see the older ones eyes on their younger siblings. Several men came up to us and said ‘Ana bebe!’ meaning ‘I’m a kid’, give me a pudding. Everyone in the camp is under nourished.