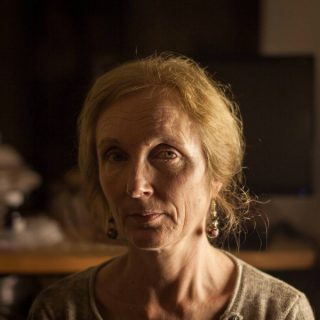 At 19, I set off for South America, armed only with fluent Spanish and a love of Latin American fiction. I hitched a passage from Spain to the Caribbean on a privately owned yacht. From there I made my way to Peru. For a few weeks I experienced the excitement and the loneliness of travelling solo, until a Peruvian social worker took me under her wing and invited me to live with her and her family. In Lima, I became a volunteer community worker in a shanty town and saw people living in poverty and squalor for the first time.

Back in England a year later, I took a degree in Philosophy and Spanish, began writing short stories and trained as a criminal and family lawyer. In 1989 I spent an eight month sabbatical in the West Bank and Gaza, where I learned Palestinian Arabic and interviewed Palestinian and Israeli ex-detainees for my first book, Making Women Talk: the Interrogation of Palestinian Women Prisoners. I spent a lot of time drinking tea with and listening to Palestinians on the porches of their houses. Within a few months I had acquired a lasting fascination with the complexities and contradictions of the Middle East.

In the 1990s I began to specialize in child protection law, which enabled me to practice part time. This was harrowing work, but it felt worthwhile and my quiet days at home writing gave me respite. In 1993 I travelled to northern Iraq, where I researched my book Sweet Tea with Cardamom: a Journey through Iraqi Kurdistan. Again, the bulk of my time was spent drinking tea with women (and men) while listening to their stories. The natural beauty of Kurdistan and the raw warmth of its battered people touched me deeply.

On returning home I took a Masters in Middle East Studies, specializing in history, politics and Arabic language. I made my first visit to Lebanon in 1999. Lebanon had intrigued me for many years, due to its sectarian complexity, its history of recent bloodshed and its significance in the Arab-Israeli conflict. After a couple of weeks walking in the gorges of northern Mount Lebanon, I formulated the questions which would be at the heart of The Curtain Maker of Beirut: Conversations with the Lebanese; but the book’s gestation was to be long and slow.

After completing The Curtain Maker in 2006, I stopped travelling in the Middle East and spent my free time walking in the French Pyrenees. My first novel, Donkey Business: a Pyrenean Adventure of the Heart, was published as an Amazon Kindle in 2013.

Over the last couple of years, the war in Syria and the arrival of large numbers of Syrian and Iraqi refugees in Europe have brought my attention back to the Middle East. In the spring of 2016 I revived my Arabic language and spent time as a volunteer in a refugee camp in northern Greece. The experiences I had there inspired me to write Hara Hotel: A Tale of Syrian Refugees in Greece, in which I interweave a chronicle of everyday life in the camp with the personal story of one refugee, and my attempt to understand the political and historic factors driving the war.