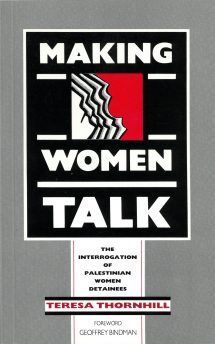 In the early days of the first Palestinian intifada, Teresa spent a year living in the West Bank and East Jerusalem. Drawing on her training as a criminal barrister, she met with Palestinian women activists who had been detained and interrogated by the Israelis. She also spoke with a handful of Israeli women activists who had been interrogated for pro-Palestinian activities. Her self-imposed project was to document interrogation methods which had been specifically developed to target the vulnerabilities of these detainees as women and mothers. While tests of physical endurance were commonplace, it was the psychological pressure to which the women were deliberately subjected which disturbed Teresa the most, opening her eyes to the cruelty of the occupation.