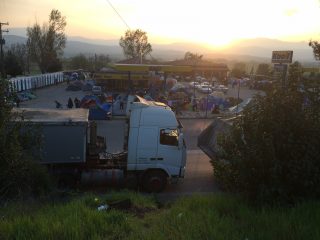 What a day! It’s 7.30pm in Macedonia, but 8.30pm 2 kilometers away in Greece where I’ve just come from, on foot, enjoying the dusk. Now I’m sitting in the hotel dining room, about to tuck into chicken soup and baked potato. All home-cooked to order, very good and cheap…

The reason I came back on foot was that today at lunch time the refugee men in our little camp lined up, climbed the embankment on to the main road above and marched up to the border (about 500 meters), where they sat down in the road to block the traffic. By the time we got there, walking past a long line of stationary haulage lorries, some press photographers had arrived, as had a group of Greek police. The police stood in a line between the refugees and the lorries, quite relaxed, lounging on their riot shields and looking bored but good-humoured.

A warm sun beat down on all our heads. Refugee women stood at the metal barrier at the side of the road. A couple of women had brought tents which they placed in the front of the protest, then occupied, enjoying the shade. Someone had written ‘Open the border’ on a piece of cardboard. The refugee men were mostly jolly. One, a gaunt man of about fifty who wears a baseball cap and tends to crack a lot of jokes, would stand up from time to time and lead a chant of ‘Open the border, open the border!’ in English. The Macedonian authorities who made the decision to close the border some six weeks ago were not in earshot, as there is about half a kilometer of no man’s land between the Greek side where we were and the Macedonian side. But the press were the real intended audience, and as the afternoon wore on, quite a few photographers and TV news people appeared. I’d be interested to know if the story is covered on Channel Four news, if anyone wants to watch it later and tell me?

I was with another British volunteer and a young Syrian Kurd who has fluent English. He told us we should not sit down with the protesters as it could compromise our position with the Greeks, so we took his advice. We stood at the barrier and chatted with the women and youngsters who had come up from the camp to watch. A young lad standing next to me told me that he had a bump on the back of his head because a Greek policeman had driven his car at the protesters. The bump wasn’t obvious but he had a headache so I gave him some of my magic Panadol tablets which I use for headaches, to dissolve in his bottle of water. He was sixteen, travelling with his aunt and her family. I have yet to meet an unaccompanied minor. Apparently they’ve mostly been taken in by the Greek authorities (whether into foster care or to a camp, I don’t know).

Next I got chatting with a bunch of women in headscarves and long dresses. They spoke very fast and I only got some of their story, but their distress was very evident. One showed me a video on her phone of their boat ride from Turkey to one of the Greek islands. She said it was awful, and when they arrived they had to wade to the beach through water up to their waists. I found out today that the smugglers don’t captain the boats, they simply supply them (for a hefty fee) and one of the refugees has to operate the boat and navigate. Okay, perhaps, in good weather, but dire in bad weather. The women kept saying we didn’t risk our lives on that boat ride to then have to sit here in Greece, day after day, week after week. They had a lot of male relatives who were already in Germany, seeking asylum there. I said ‘get your relatives to see a lawyer and ask if they can bring you to join them, once they get their status’. I added that I don’t know any German asylum law, but it is worth a try.

One of the women became so upset as she was talking that she started to cry. I felt bad, because all I could do was listen. I told them that in many countries in northern Europe the people are sympathetic to them, but that the governments do not want more refugees. I said that is how is is in the UK.

Earlier that morning I had had a similar conversation with some very young women, in the toilets of the petrol station / hotel where the camp is. The man who owns the place is pretty pissed off with the invasion of his business, and only allows a few people the key to use the indoor toilet. One young Syrian was washing her hair in the basin, and another told me her husband is in Germany and she is trying to get there. They were all really worried about being sent back to Turkey, so I tried to reassure them that provided they had arrived in Greece before 20 March (which they had), they should not be sent back.

My favourite people of all the ones I’ve met so far are the family who asked for the lights yesterday. They have four tents set out neatly beside the wall of the gas station, with a field on the far side. There is grandmother, a beautiful woman of about fifty five, her son, who looks at least forty, and about four or five of his children. The mother has a heart problem and was not fit enough to travel. This family are from a district of a Syrian city which came under extremely heavy bombardment from the regime in 2011. Everything was destroyed – their car, their house, the whole neighbourhood – so they fled north to the Syrian border with Turkey. They were in a camp their for five years – yes FIVE YEARS – until the Russian bombardment made it too dangerous even to stay there, so they set off through Turkey for Greece.

This morning one of the boys was dangling a small green snake on a stick, just outside the tent. They were really worried because two snakes had got into the tent in the night. I took a good look and was not sure it was a viper, but obviously there’s a risk. The dad asked me if I could get them some anti-snake spray, something with a bad smell to stop any more snakes coming in, but my group leader thought it wasn’t a good idea as it would be dangerous for the kids to inhale it. Later on I asked a medic and he said there is no spray that will stop snakes. He said the only thin is to put a line of bottles filled with earth along the entrance to the tent.

I spent the early part of the day picking up rubbish. The place is awash with it – the detritus of temporary living – plastic bottles, drink cans, cigarette butts, and the ubiquitous discarded ‘wipes’. We gave out black bin bags and rubber gloves, but Charlie and I did a lot of the laborious picking up by ourselves. I quite enjoyed it, until the sun got too hot. At one point I asked myself ‘would I rather be in court right now earning money, or here in a refugee camp picking up litter as a volunteer?’ The answer of course was ‘here’. After I got fed up in the camp itself I wandered into the adjoining field, where a family were sitting chatting by their tents and an open fire. They were Syrian Kurds, and we had a great chat about Iraqi Kurdistan, where they had fled to, for three months, earlier in the war.

For my money, this family have chosen the best spot in the whole camp. They are away from the road down a little bank, and they have an unobstructed view of the mountains. Because it’s early spring, and sunny, the fields are really lovely, lush and green, and the trees are bedecked with intriguing catkins and whiskery blossoms in different shades of grey, yellow and green. At one point this morning, standing on the petrol station forecourt, by the row of portaloos, I looked across into the field, and saw that a little barber’s shop was in operation. A handsome young man was sitting in a plastic chair with a towel round his shoulders, while his mate, the barber, gave him a very sharp side cut. And some of the older women have been asking us to bring them hair dye, ‘to cover up the grey’. Yes!! If a dying session is organized, I’m going along, as I didn’t get time to dye my hair before I left.