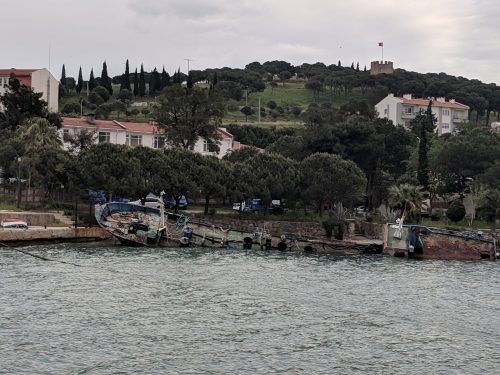 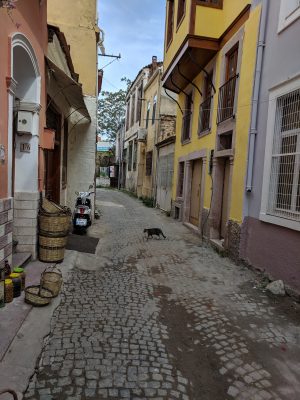 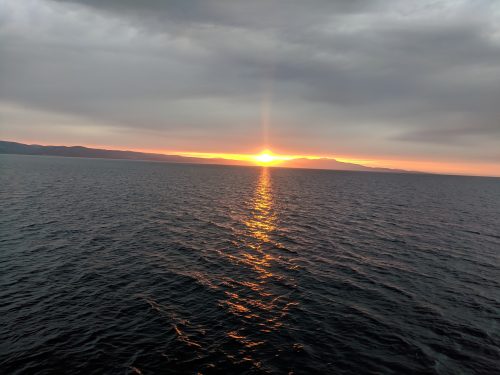 Arriving home just now at 9.30pm, the smell of jasmine surrounded me as I stepped out of the taxi. The lights of the Turkish coastline were bright in the distance; immediately below the road, the dense foliage of the citrus grove rustled in the darkness. And then, as the taxi driver slowly turned his vehicle round, under the spreading branches of the platanos tree which is the landmark I’ve been told to ask for when I take a cab, my landlady’s little dog started to bark in greeting. This dog is both annoying and endearing by turns. He’s utterly harmless and so desperate for attention that when he runs towards me in the dark, barking, he then throws himself on the ground and rolls on his back, in the hope that I’m going to tickle his tummy. I never do. I tell him firmly in my best Greek to shut up, as given half a chance he would follow me into my living room. He disappears into the darkness, I feel guilty, but a moment later he’s barking at some insignificant rustle and I’m cursing him.

Today I went to Ayvalik in Turkey, on the car ferry, with a German volunteer who speaks fluent Turkish. It was an overcast, cloudy day, not very hot, but lovely sitting on the deck this morning watching Mytilene disappear and the irregular Turkish coastline taking shape before my eyes. I find the idea that by crossing five miles of sea you make the transition from Europe to Asia Minor both bizarre and astonishing. It’s thirteen years since I was last in the Middle East proper and I was quietly excited.

The ferry moored beside an ancient, wrecked schooner lying on its side, half submerged – quite a sight. Above it on the outskirts of the town stood a square, solid building in terracotta pink, with peeling paintwork, rows of officious-looking windows and a couple of short, stout palm trees. I’d expected Ayvalik to look quite like Mytilene but on the contrary, this building immediately reminded me of government buildings in Iraqi Kurdistan.

There was a bit of confusion at passport control – did I need a visa for a one-day visit or not – and then we were out on the street, making for a nearby mosque. The minaret was tall and slender, beside a bulbous dome. Probably the building was originally a church, in the days before 1923 when this was Greek territory. We took off our shoes in the lobby and I found a headscarf in my bag. Inside was a simple, square room with a red patterned carpet, Arabic calligraphy painted near the top of the walls and a wooden spiral staircase in one corner leading up to the platform where the women sit. The place was empty except for an old man. He sat  propped against the wall, with his stockinged feet stretched out in front of him and a lectern resting on his knees, incanting prayers in Arabic. He sang slowly and with intense focus and it was easy to pick out some of the words. The atmosphere was utterly peaceful and we both wanted to linger. I thought of my dad, who is ninety seven, and till recently used to lie in bed meditating in a rather similar position.

When we came out of the mosque we turned up a narrow residential street of uneven cobbles that led further up hill. A stream of water ran down the middle, from a burst pipe. Weeds grew between the stones. There was absolutely no traffic – such a change from Mytilene, where mopeds terrorise pedestrians on every alleyway. It was Labour Day today, a public holiday.

The houses were small and tatty, painted in pale colours, and we passed more than one collapsed building behind a broken-down wooden fence. Very large dogs lay snoozing on their sides in doorways. Funny how the Greeks generally keep small, lap-dog size dogs, that bark fiercely as you pass, whereas in Ayvalik these huge dogs were passive and gentle.

After ten or fifteen minutes we came to the main square. Everything was open: there were mobile phone shops and underwear and opticians and shops selling plastic handbags and suitcases. We sat down in a pavement café beside a bronze sculpture of a horse. Tea was brought, first in glass cups, by a man who responded with great friendliness to my friend’s Turkish; but the second round came in tiny tea glasses. These reminded me so much of Iraqi Kurdistan that my eyes filled with tears.