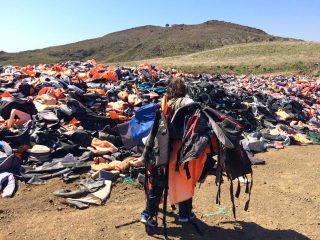 Pikpa camp and the silver sea

Sitting on a cold metal chair at Mytilene airport. It’s unbelievably close to the sea. From where I’m perched, I’d say it’s not more than forty metres to the water’s edge. No space for a tired pilot to make even the teeniest mistake!

Today I sat on a tiny stool in a taylor’s workshop, waiting to put some questions to the taylor, a Syrian Kurd by the name of Diari. I was in a wonderful refugee community centre which occupies a site on a run-down industrial estate above the sea in the vicinity of one of the camps, and is run by a bunch of inspired young volunteers.

from Turkish waters to Greek waters

Today I met a woman who keeps watch at night for refugee boats. She has a small group of people who live near the beach and they take turns to watch – with binoculars – and to be on call to respond. Most of the boats these days are met either by the Greek coastguard or by Frontex, but about ten per cent of them make it to the shore without being intercepted. 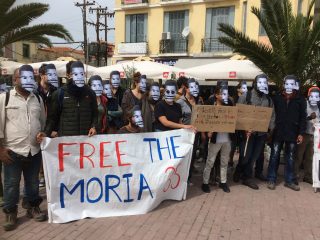 A storm in the Aegean

I’m sitting in my airbnb cottage, which is out on the coast to the south of Mytilini, listening to the wind gusting around the building. Rain is forecast for tomorrow and it sounds like a storm is blowing up.

Under the terms of the EU Turkey agreement of March 2016, refugees arriving on Lesbos are taken to a former military camp called Moria. It has become dangerously overcrowded, and now houses around 5,200 people, some of whom have been waiting eighteen months to two years for decisions on their asylum claims. There has been a lot of trouble there this week, with confrontations between the Greek police and some of the refugees.

I’m sitting on a bench outside Athens airport, drinking in the beauty of the pale azure sky and the grey-green silhouette of a rocky mountain ridge. Can’t quite believe that I’m here once again. Started to well up as I came down the steps of the plane. There’s nowhere I’d rather be; and it all feels quite familiar now.