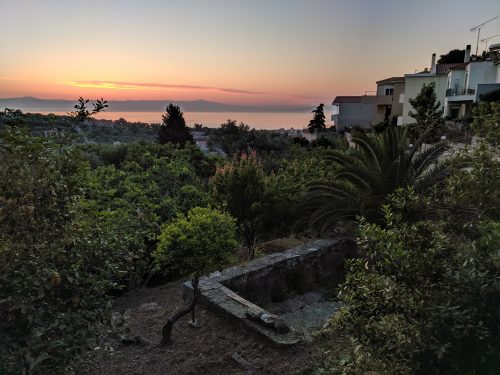 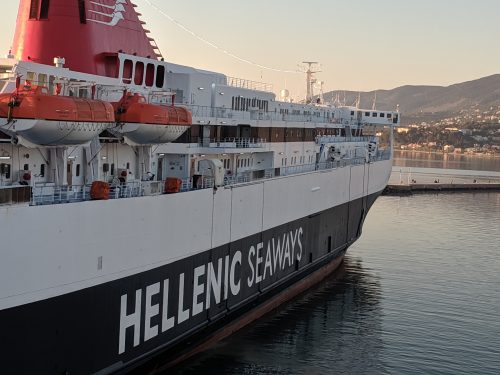 It’s Sunday lunchtime and I’m sitting on the back deck of a ferry that’s carrying me, everso slowly, to Athens. It’s the day time boat, the one that stops at six or seven islands on the way and takes 17 hours to Piraeus. I chose it because it’s hard to leave my new friends behind and I prefer to do so slowly. I will miss them a lot, particularly the young Syrian who’s been teaching me Arabic, and whose friendship has made all the difference to my time in Mytilene.

A handful of new passengers boarded the boat at Samos, where conditions for the refugee population are said to be much worse than in Lesbos. For the last 45 minutes a tall, thin young man has been pacing up and down the deck, with a large holdall slung across his shoulders, talking to somebody in Arabic on his mobile. I was watching him on and off, imagining that perhaps he’s talking to his mum or his brother in Iraq or Syria. Perhaps he’s just got his papers and is on his way to Athens. How incredibly brave, it seems to me, to stand on a ship which is taking you ever further from your family and the world in which you grew up, and to phone home and tell them that you’re fine. Which perhaps he is, in a way; but what a massive, challenging adventure he’s in the middle of. (I don’t think people tell their families in any detail about the difficulties of their journeys to asylum in Europe. They know that for the people they’ve left behind, life is also extremely difficult.)

This morning the ship left Lesbos at 6.45 am. I sat out on the top deck for a long while, watching the town recede and trying to pinpoint my landlady’s house, in the folds of the hills to the south of the town. When I went down to explore the lower decks, I found small groups of Roma stretched out on the floor on rugs, with pillows and blankets. Mum, dad and kids all cuddled up together, like a litter of kittens. In some places they were blocking the gangways, but nobody seemed to mind. This weekend, I’d heard, Roma from all over Greece gather on Lesbos to visit the shrine of a saint at Taxiarches, somewhere in the north of the island. The travel agent warned me to avoid the Sunday night boat, because it would be so crowded with returning pilgrims, and they would all be on the decks. ‘It won’t be pleasant’, he’d said with a grimace. Perhaps the Roma on this ship are ones who couldn’t get tickets for tonight’s boat.

A man in a stripey T shirt and shorts has been strutting around the deck for an hour with a selfie stick, taking photos, mostly of himself but occasionally including a fat woman in a red sun dress.

Now it’s nearly three pm and the ship is gliding slowly through a group of islands to the west (?) of Samos. From the sea the land appears rocky and barren, with few trees, uncultivable. There are steep rocky outcrops – small mountains, rising to perhaps 1400 metres but it’s hard to tell. Uninhabitable, I thought about the last island; but ten minutes further on I was picking out the line of a stone wall snaking up the hillside; and then we rounded a point and there was a small port, all white houses and orange roofs and lush sap green bushes among the grey-green foliage of olive trees. Cypresses, too, and a line of wooden telegraph poles climbing the steep hill behind the port. The ship backs towards the dock, and now a couple of dozen people have gathered at the railing.

And now its 7.27pm and the boat is reversing out of Schios, the rear deck crowded with at least a hundred teenagers who just boarded and have taken over all the chairs. They’ve got their music blaring and they’re huddled together at the circular tables, mostly boys, some in baseball caps, hormonal and anxious like British teenagers, spotty, determined to give the impression they’re having a good time. My good mood of the earlier part of the day is fading as I weary of the stink of cigarette smoke wafting under my nose regardless of where I choose to sit, the sound of plastic chairs being scraped across metal, the screeching of fishwives with topknots and the ceaseless juddering of the engines. I like the judder when I’m lying down on a bench in the fresh air, it lulls me to sleep; but when I’m sitting up on deck in a port, it makes me feel slightly sick.

The last few port stops have been executed with ever greater speed, as if the captain is determined to get us to Piraeus on time, come what may. Ten minutes before we dock a bossy woman’s voice announces, in Greek and English ‘We have now reached the port of X and passengers for X must please disembark.’ She says this at least three times, despite the fact that the ship is still moving and disembarkation would entail jumping overboard into the water. The first stop, this morning, at Xhios, was for an hour or more. This last one at Schios was no more than seven minutes.

And what a bizarre looking place Schios is. Three pointed hills crammed with box-like, pastel coloured buildings form the town above the docks. The central hill is like something in a children’s story book: shaped like an upside down V, it has a fairy tale quality (but not pretty, in fact almost spooky); and on the summit stands a large, imposing, primrose yellow church. So sugary and pale are the colours of the buildings that the town reminds me of an overly-decorated birthday cake. Unlike in the port towns in the northern Aegean, there is almost no greenery between the buildings. In fact, from my brief glimpse from the deck I would say there were no gaps between the buildings in which anything could grow. The blocks were rammed together tightly, in a pyramid formation, ten along the bottom, nine above, eight above and so on, till the solo church at the top rested on two houses. 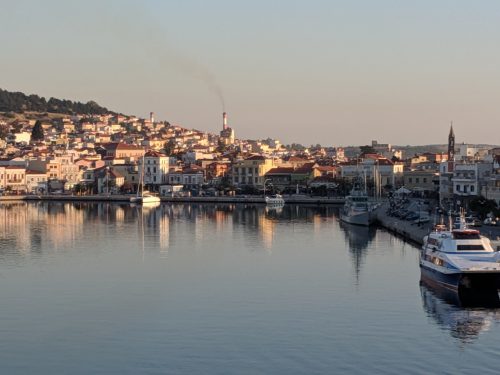 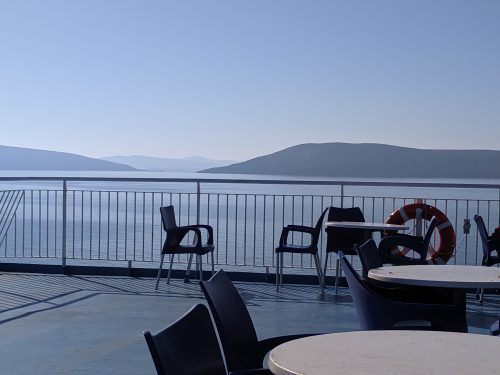 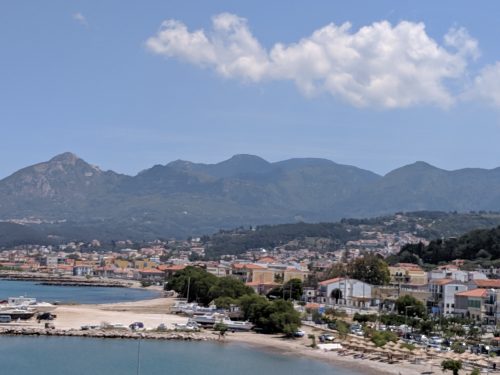 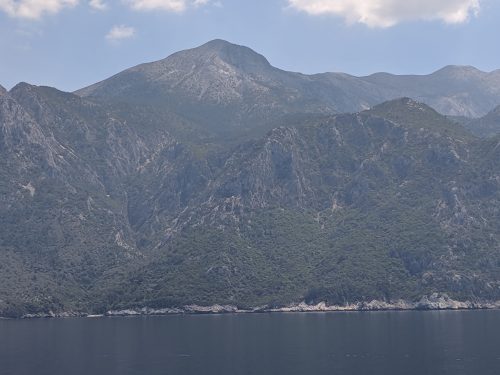 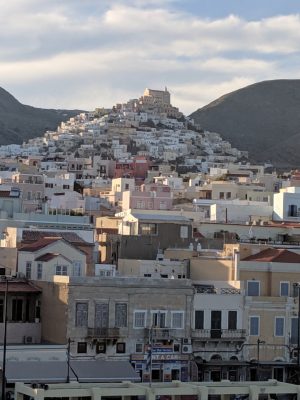 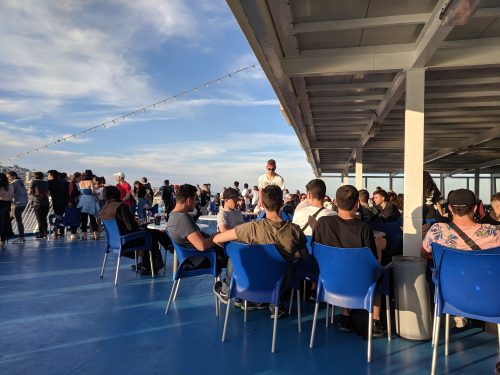 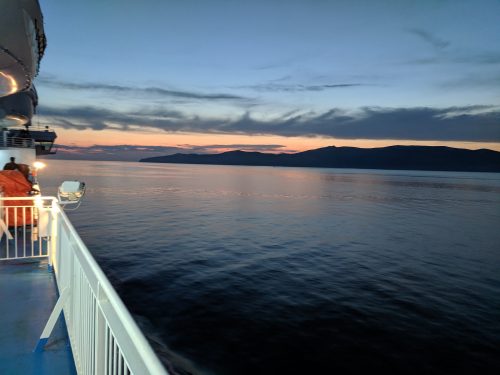