Climate change and an old man 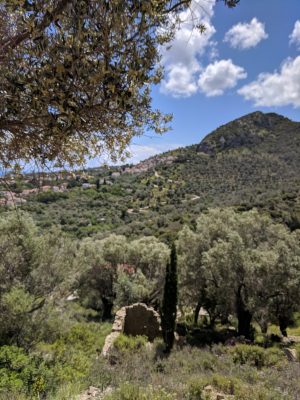 This morning it was so cold that I struggled to keep the door open onto the patio. Thirteen degrees, according to my phone. I worked on my laptop all morning and by lunchtime I was feeling chilled.

But this afternoon I went out with my paints, climbed the very steep concrete road at the back of the house, and sat on a low parapet wall, comfortably, with one foot on the road, the other dangling down the rocky hill and a flat area for my palette. The rock is a kind of shale, laid down in fine layers, ready to splinter. From this position I had a fabulous view back down the hill and into a cluster of red roofed houses and a chapel, with the sea behind and the blue-green silhouette of the Turkish coast on the horizon. Very paintable. The sun came out from behind a dense cloud and began to warm the left side of my neck. After a while I was able to take off my fleece. Within an hour my left leg was getting so hot inside my black jeans that I thought I was burning. Not very clever. But this is an isolated spot, where the concrete road peters out and is replaced by a dirt track that winds around the contour through the unending olive groves. I’d not seen anybody up here, ever; all the occasional comings and goings of cars and mopeds are to the group of houses at the foot of the hill. So I got up, hid behind a bush, pulled down my jeans and slapped a lot of suncream onto my leg, which was bright red. When I came back out, to my astonishment, the bearded figure of an old man, bent almost double under the weight of a sack, was advancing up the hill in the shade. He was raggedly dressed and leaning on a big wooden stick; he looked like a figure out of the past, unlike anybody I’ve seen in Mytilene. I sat back down astride my wall and waited for him to get closer. Then I called out the only greetings I know in Greek and held out my painting, so that he could see what I was up to.

The old man replied with a stream of friendly words, and seemed pleased when I tried to say how beautiful the landscape is. He sat down on the low concrete wall on the opposite side of the road – in the shade, which is where I should have been. I went on painting, but was thinking about the history of modern Greece which I’ve been reading when I wake in the middle of the night. It talks about the Greek struggle for independence from the Ottoman Empire in the early nineteenth century and the long slow process by which the nation was formed. Much of the territory which became modern Greece was peopled by illiterate peasant farmers, and my companion seemed to belong more to that nineteenth century world than to the twenty first. After a few minutes he started speaking again and gesturing with his hands. The language sounded amazing and I wished I could understand. Eventually I realized that he was asking where I was from, so I tried saying Britain and England, first in Arabic then in English. ‘England!’ he cried, pleased to recognize a word.

At that moment a much younger man drove up the hill on a moped and dismounted beside my friend. After a brief conversation and waving goodbye to me, the pair set off together along the dirt road.