Rain on the Acropolis 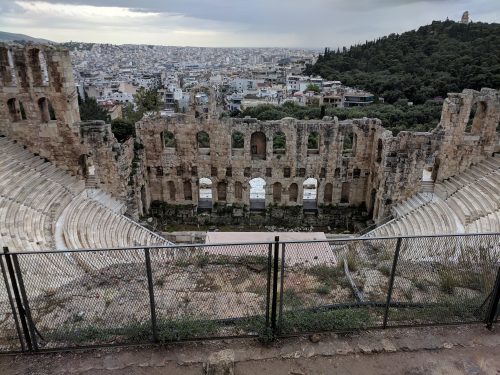 It’ s been raining on and off today in Athens, where I’ve stopped briefly on my way to Lesbos. Such a relief to be away from the protracted Brexit agony. Three years ago when I first came to Greece to talk with Syrian refugees, I glanced at the incipient Brexit saga from afar in disbelief. In the context of the suffering in Syria, our planned referendum seemed like an act of national self indulgence, one which got in the way of us helping people who desperately needed our assistance. But in the last nine months I’ve become obsessed by it, watching the news avidly every night and tending to switch off mentally when Channel Four talks about anything else. I’m ashamed to admit that, but it’s true. Brexit has sucked me in, like a vortex. 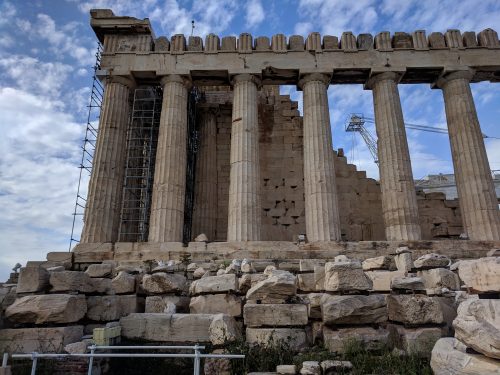 And now I’m back in Greece, about to find out what life’s like in 2019 for the fifty thousand odd refugees who are stuck here. The organisations which support them are generally very critical of the EU’s failings. When I was here in 2016, and even in 2017 and 2018, I shared their anger. No doubt I’ll feel that way again; but in the last few months I’ve developed something close to real respect for the EU leaders I see nightly on the box. When I compare them to British politicians, they seem states-person-like; dignified and infinitely more clear-headed.

This afternoon I walked around the Acropolis in the rain. My first visit. It was a treat to climb up high and see Athens spread out below, its streets grey and white, with clumps of cypress trees, the mist-shrouded sea, islands and tiny ships. The semi-ruined columns of golden stone are an apt reminder of how great civilizations exist in time; how they come and go. (I don’t mean Britain was ever a great civilization, but I do think there’s something in the idea that Brexit is the dying spasm of a former empire.)The whole site is littered with lumps of rock which still lie where they fell when the Venetians blasted the Parthenon in 1687; interspersed with weeds, dark red poppies, and wandering pussy cats. A tabby with a pigeon in its mouth was darting about between the tourists, searching for a private spot in which to devour its prey.