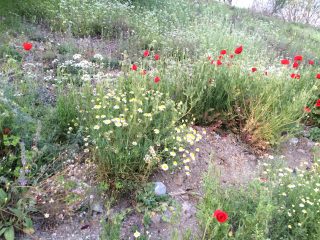 The Woman with Dyed Red Hair

As I took my aisle seat on the plane from Gatwick I saw that my companion in the window seat was a Greek woman of about my age. We exchanged smiles but didn’t speak at first. While the hostesses were selling paninis from their trolley, she got out a home made sandwich. She had dyed red hair and sat coiled in her seat as if she wanted to weld herself to the side of the plane…

Half way through the flight we got talking. The situation in Greece was terrible, she told me. She’d been to London to visit a friend, but not to get away from the economic crisis. She was worried sick about her son. He was twenty three, and had come home from his 9 months compulsory military service in a state of depression. He had no job felt he had no future and wanted to move to Australia, where his best friend was living. I could see the pain in her face as she talked. Both she and her husband were tormented with worry. What would become of their boy in Australia, she asked, if the depression didn’t lift and he was thousands of miles from his mum and dad? He was their only child.

Piraeus was crowded with refugees, she told me. People brought them food, but they were in a bad situation. The Greeks didn’t have the resources to give them enough help. I suggested that the rest of Europe should be giving more help, it wasn’t right to expect Greece to carry it all. She agreed, of course.

The flight from Athens to Thessaloniki was very different. It was a big, solid plane, with seats in black and yellow plastic, and most of the passengers were young men dressed in black. Some had fantastic side cuts, one with a mane of dreadlock coiled into a luxuriant bun; another with sharp little diamonds pointing down into the shaved lower part of his skull.

I don’t like not knowing Greek, and I really don’t know any, except the few words Tim reminded me of before I left. Outside the airport I haggled as best I could to get a good price for what I had been told was a 2.5 kilometre ride to my hotel, but ended up paying a ridiculous 16 euros for a much longer ride, while the driver explained that the website lies about the distance from the airport to the hotel. I’m sure it’s true. When I got out the driver told me that many of the refugees are leaving Idomeni. Downcast, I dragged my backpack up the hotel steps. And now I’m sitting on the bed, showered, rehydrated and relieved to be stationary. It feels very odd to be warm, almost to the point of not wanting bedding: at home my attic rarely gets above 9 degrees at night.