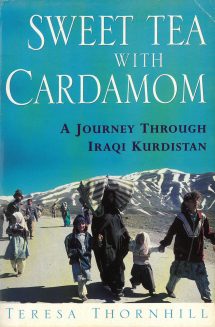 Sweet Tea with Cardamom: A journey through Iraqi Kurdistan

After the Gulf War in 1991, the Kurds of Iraq rose against Saddam Hussein’s genocidal regime. Their brave but short-lived rebellion led to the setting up of the Safe Havens in northern Iraq. During those heady but precarious days, Teresa Thornhill journeyed twice to Iraqi Kurdistan. She travelled widely with her peshmerga guard, spending time with displaced villagers, widows of the genocidal Anfal campaign, members of the newly-formed Kurdistan regional government and a handful of Kurdish intellectuals. Teresa sought out and met many Kurdish women, including survivors of the 1988 poison gas attacks on Halabja which were masterminded by ‘Chemical Ali’ (Ali Hasan al Majid, later executed after the fall of Saddam); and a mother who openly described her role in the honour killing of her own daughter.

Teresa found herself deeply moved by the Kurds she met. Sweet Tea with Cardamom: a Journey through Iraqi Kurdistan records with insight and passion the land, the people and the struggle at a unique moment in the fight for a free Kurdistan.

Praise for Sweet Tea with Cardamom

‘Deeply moving and beautifully written. The pain and exuberance of Thornhill’s encounters shine through every chapter of this book.’ Kanan Makiya

Reviews of Sweet Tea with Cardamom

‘As in Making Women Talk (Lawyers for Palestinian Human Rights 1992) Thornhill explores the Middle Eastern world through the eyes of its women. In each chapter, the reader meets a girl or woman who shares her experience of living under Hussein’s regime in Iraqi Kurdistan. Cultural mores, such as the difference between honor and shame, are explained in tales like that of a 14 year old girl whose mother had to kill her in order to save the family’s honor after the girl brought shame upon them by being raped in a field by strangers. The passion and poignancy of these stories, brought to life through Thornhill’s warm, descriptive prose, make this book hard to put down. Recommended for all libraries.’ Stephanie Papa, US Library Journal – Autumn 1998

‘A barrister by training and a good reporter, Thornhill writes about the plight of the Iraqi Kurds with quiet authority. She travelled through Kurdistan after the Gulf War when the UN had moved in and the country was temporarily free of Saddam Hussein. Evidence of torture and chemical attacks pre-1993 were easy to find. Sadder still, the women victims she interviewed raped by Iraqi interrogators, had often been rejected by their own parents and husbands for bringing dishonour on the family. A grim story, full of brave people who are now living again under the threat of genocide.’ Judy Cooke, The Mail on Sunday – 2nd February 1997

‘As the Iran- Iraq war drew to a close, Saddam Hussein turned his fury on the Kurds. He dropped chemical gas on several villages and bulldozed others. He arrested their inhabitants, taking them south to Baghdad prisons from where they never returned. After the Gulf War, the Kurds revolted and established a shaky, semi-independent state. Teresa Thornhill travelled around Iraqi Kurdistan in 1993 during its brief experiment with democracy. Sweet Tea with Cardamom is partly travelogue and partly a record of conversations she had with the survivors of Saddam’s atrocities.’ The Observer – 26th January 1997